Welcome to the Speak English Podcast, your resource for practicing your English speaking and listening. You will also learn about lifestyle and culture, language, vocabulary, and how to learn English more effectively.

Today I want to talk about some stories that occurred in a job interview. I think it will be fun.

Later, you’ll practice grammar with a Point of View Story.

You have a degree, a master or an impressive background, and you are a real professional.

A call. It’s a company that wants to interview you.

You’re excited! On the day of the interview, you prepare yourself: you get a nice haircut, dress properly, you are a bit nervous but focused, and the interview begins in English.

Here’s the harsh truth: Not having interview skills in English will prevent you from getting the job of your life.

If you already know some English, preparing for a job interview’s easy, and you don’t need too much time.

At the end of the lesson, I’ll tell you how you can prepare for a job interview in only two weeks or less.

Okay, let’s listen to some stories that happened in job interviews.

1) Let’s start with the first one:

“In the interview, they asked me, “where do you see yourself in five years”, and I answered, ‘not here.’ They never called me back.”

In this case, he was right. In five years, he wouldn’t work there because they never called him back.

“After undergoing three interviews for the position, I was introduced to my new boss, who happened to be the father of my ex. Despite being very worried, we ended up becoming good friends even more so than when I was dating his daughter.”

What a small world! In this case, the interview could have ended very badly, but we can safely say that this guy was very lucky.

3) Let’s continue with the next one, which is very interesting.

“The interviewer started looking at me with a puzzled face, and the first thing he asked me was if I could prove all the experience described in my CV. I told him that I had no experience at all since I had just finished my studies. He showed me the CV, and to my amazement, it was my dad’s!”

What a coincidence! For some reason, the interviewer had his father’s CV. Maybe the father sent a CV to the same company.

(END OF THE EXTRACT).
Get the transcript in PDF here. 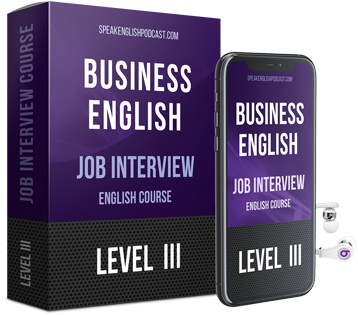 Do you have a job interview in English soon?
Don’t worry about it. With the Job Interview Course, you will be ready for your interview in two weeks or even less.